“Does the mainstream media still serve any useful purpose?” – This was the question posed by an audience member during Question Time this week, so we decided to take a look at the influence that mainstream media brands still have on the political debate in the UK and whether they still have a role to play.

Editor of the digital news outlet The Canary, Kerry-Anne Mendoza, bemoaned the lack of diversity in media in response to the question, claiming that “51% of our journalists were public school educated, compared to 7% of the population at large.” Though this was met with scepticism from some pockets of the audience, she is partially right. FullFact.org ran a fact check of the whole show and found that,

“51% of leading journalists educated and working in the UK in 2015 were privately educated, according to the social mobility think tank the Sutton Trust. Another 30% went to grammar schools while 19% went to comprehensives. Looking at the same group of people the Trust also found that 54% went to Oxford or Cambridge University.”

Whilst the report didn’t study every journalist in the UK, it based it’s findings on who they considered to be the top 100 based on professional experience and perceived influence on the public debate. This stunning lack of diversity in the upper echelons of the British media is part of the reason that sites like The Canary and Evolve Politics have sprung up across the web. Diversity of background is a key part of a free press that acts a crucial check on government.

The mainstream media in Britain has also been the recipient of vast amount of criticism over the small group of corporations that own huge swathes of the press. According to a 2015 report by the Media Reform Coalition, called “Who Owns the UK Media?”, three companies (Sun and Times owner News UK, Daily Mail publisher DMGT, and Daily Mirror owner Trinity Mirror) control 71% of the national newspaper market. The national newspapers are owned by just eight different companies, four of which account for 80% of all copies sold. Similarly, the report found that six major regional newspaper groups own 81% of local newspapers, claiming that this ongoing media consolidation has created regional “news deserts”, where professional journalists have been pushed out by cuts and closures resulting in local monopolies or duopolies. 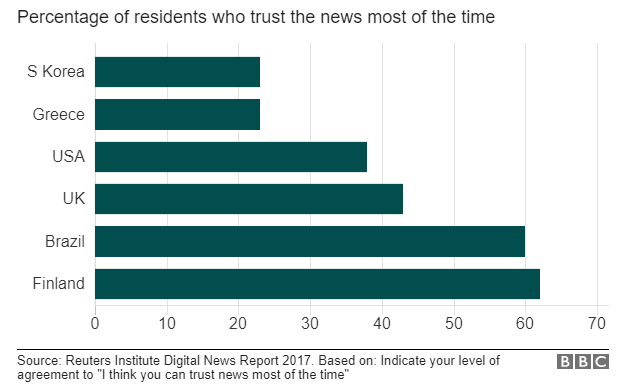 There is also a notable level of mistrust in the mainstream media that has been fuelled by allegations of bias and the spread of “fake news”. Reuters Institute Digital News Report 2017 found that that just over 40% of people in the UK agreed with the statement “I think you can trust news most of the time”, a shockingly low figure for a developed Western nation with a free press. We should however, be thankful that the problem isn’t quite as bad as in the US where President Trump has just launched a series of bizarre personal attacks over Twitter aimed at CNN and “Morning Joe” hosts Mika Brzezinski and Joe Scarborough. He tweeted,

“Crazy Joe Scarborough and dumb as a rock Mika are not bad people, but their low rated show is dominated by their NBC bosses. Too bad!”

He followed this up Sunday morning with an edited professional-wrestling video of him tackling a man with the CNN logo superimposed on his head (if you don’t believe us check it out here). Whilst our government has accused the press of being overly critical of the Brexit process, most notably when Andrea Leadsom asked the BBC if the media could be a little more patriotic about Brexit, they haven’t directly attacked the press in the way Trump has. Rather they have benefited from the anti-Corbyn bias that has led to mistrust in the media.

Whilst some brushed off the alleged anti-Corbyn bias, there have been numerous studies to support the claims that he has been treated unfairly by the mainstream press. A report by the London School of Economics (LSE) found that,

“54 per cent of all news articles were either negative or antagonistic towards Corbyn, which rises to 67 per cent for opinion pieces and editorials.”

Articles about the Labour leader were generally negative in tone, gave misrepresentation of his comments, and were somewhat obsessed with his links to terrorist organisations. Another study done by The Independent in 2016 reported that 75% of newspaper headlines misrepresented his views or comments, with the report even claiming that they were violating the Independent Press Standards Organization (IPSO) obligation to ‘make a clear distinction between comment, conjecture and fact’.

There has also been accusations that certain members of the right wing press, most notably Daily Mail editor, Paul Dacre, have received preferential treatment and have been courted by Theresa May’s government to help them sell the Conservative message. It was revealed in March that Theresa May had hosted Dacre at 10 Downing Street several months into her reign as Prime Minister, which triggered further allegations that the Daily Mail were simply a mouth-piece for the Conservative party. Running headlines likes “Crush The Saboteurs” and “Enemies Of The People” in full-throated support of Brexit and Theresa May’s distaste for democratic debate has done little to quell or combat these allegations. 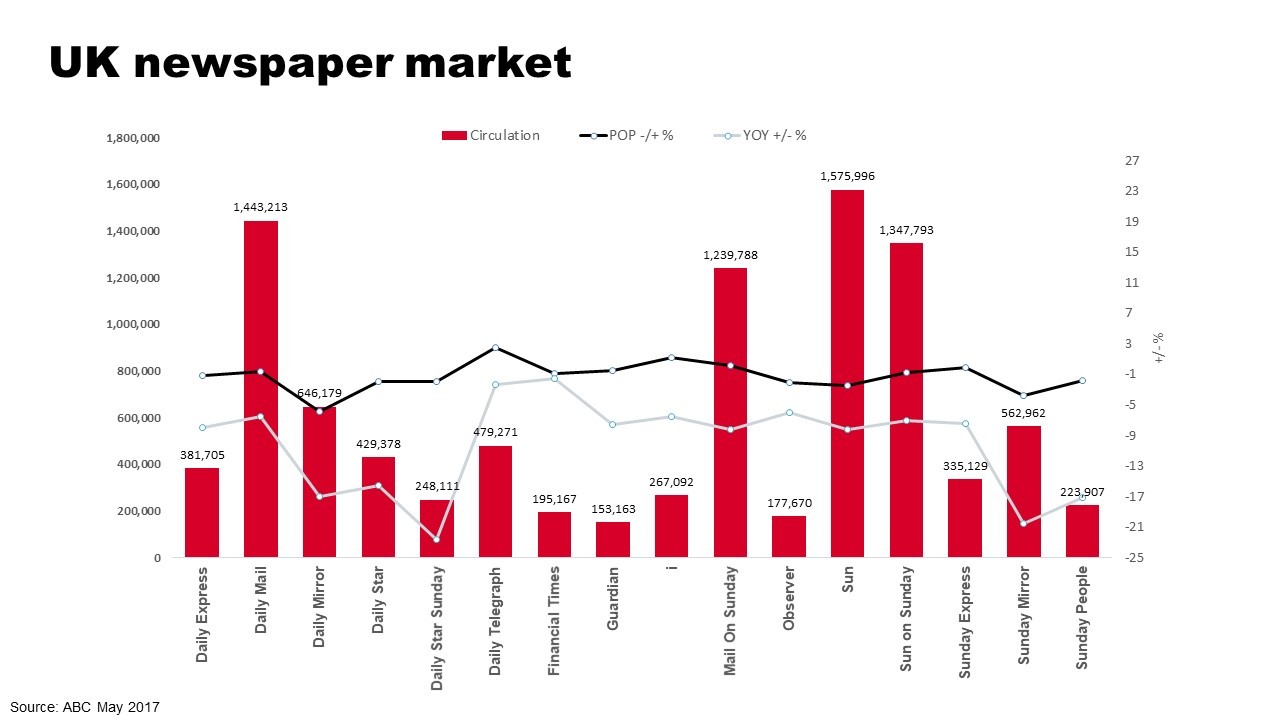 The anti-Corbyn bias and unwavering support of Theresa May amongst the right wing papers were arguably the sparks that caused the explosion in independent media over the past 18 months. Outlets like The Canary, Evolve Politics, and Another Angry Voice have sprung up to provide a counter narrative to the establishment media. Whilst there are still traditionally centrist and left wing outlets running in the mainstream press, it is the right wing, and particularly the tabloids, that have the widest reach and thus the biggest impact on our political landscape and conversation. 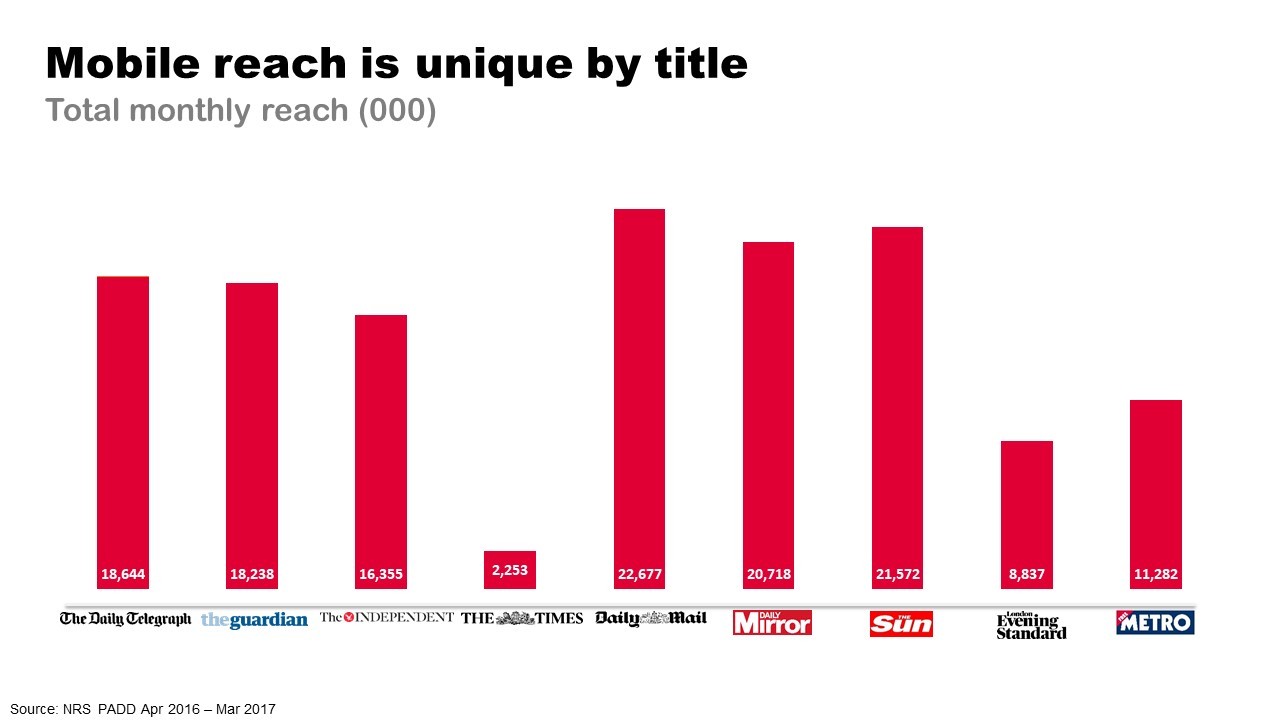 This isn’t just via print either, traditional outlets have made a somewhat successful jump to digitally driven journalism and media, although some have had to resort to paywalls or asking for donations/subscriptions in order to compete in such a media rich environment. This transformation towards digital media is arguably just another iteration of the disruption that tech and the internet have caused across every industry. Look at what Uber did to transport, what Amazon did to retail, what Fintech start-ups are doing to financial institutions, the list goes on. 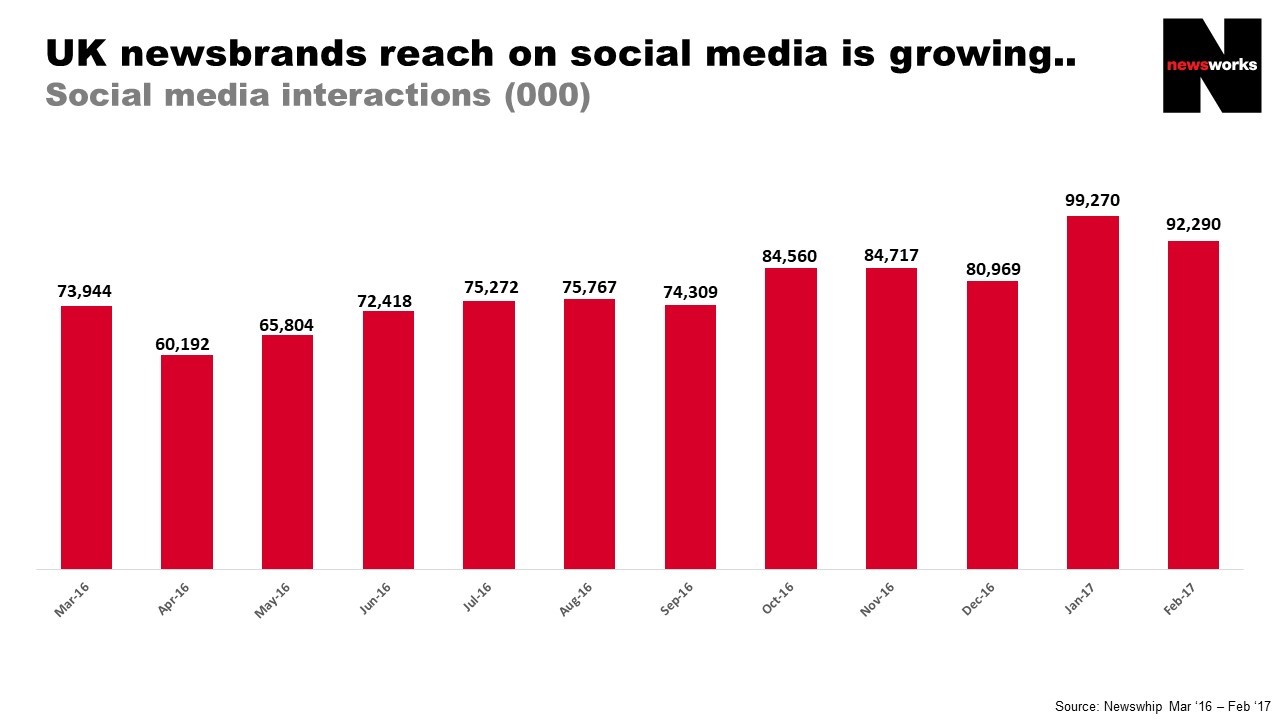 Yet within news and media, traditional outlets have managed to stay competitive in the market, and whilst disrupting independent blogs have started to gain more and more traction online, their imprint on the entire population is still rather small. According to research done by NewsWorks.org print journalism reaches one in every two adults each week, whilst online, UK newsbrands have driven 940 million social media interactions in the last month, including 817 million on interactions Facebook and 110 million interactions on Twitter. Despite the massive rises of blogging and alternative media, newsbrands still reach 97% of all millennials and have significantly more interactions online than even Buzzfeed can garner. 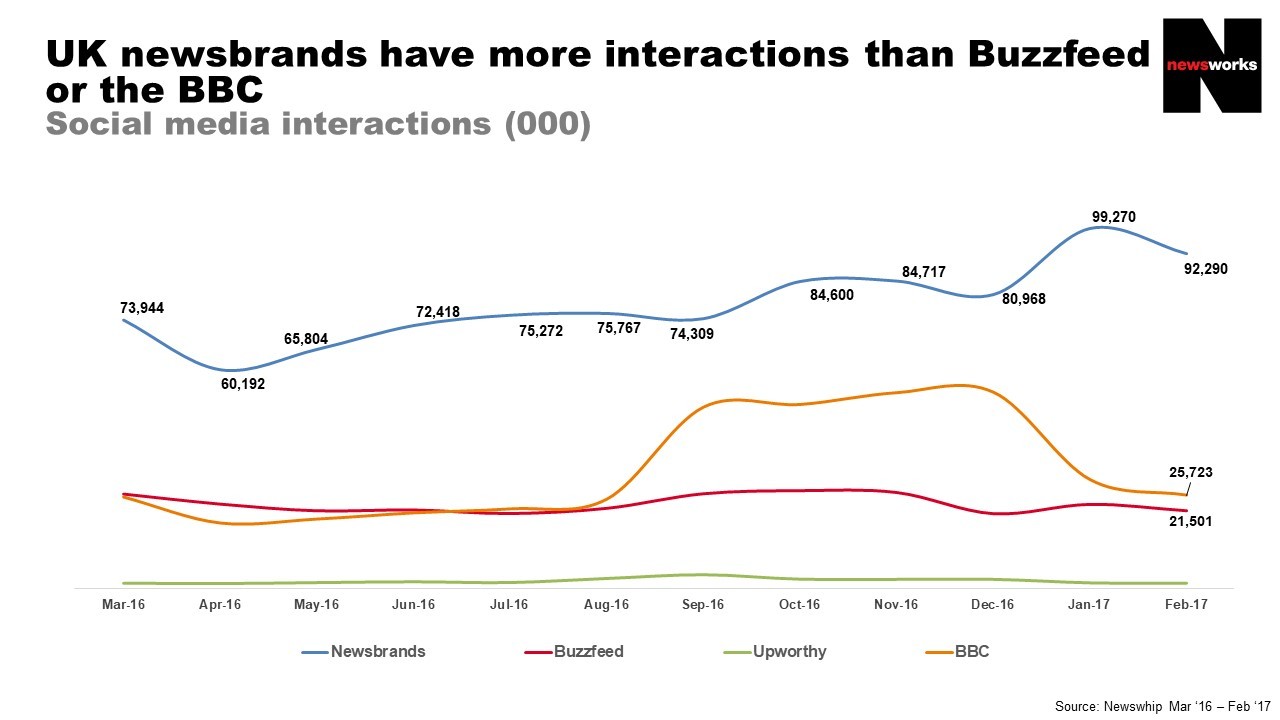 Newsbrands and print journalism have even been known to improve the quality of TV news and reporting, so mainstream can have at least some positive effects on our political conversation – although arguably one that is outweighed by the divisive rhetoric that they are constantly accused of pedalling. With such mistrust of mainstream media, despite it’s huge readership, we need to push for higher quality reporting and high standards of journalism. The country is facing a period of massive political and socio-economic instability and a free and fully functioning press is crucial to successfully riding out Brexit and holding government (no matter which party that may be) to account.

Outlets like the Canary cannot credibly criticise tabloids and the right wing members of the press for only seeing the world from one view point, whilst unashamedly supporting Corbyn at every turn. There is nothing wrong with a media outlet holding an editorial viewpoint, but many independent outlets damage their own credibility with a pro-Corbyn lens. “Clickbait” titles can also damage their case to be held in the same stead as the mainstream press, the tabloids that alternative media outlets criticise have employed similar tactics in print for decades. For example, in the last few days The Canary has led with headlines such as, “People should be tearing into the BBC for the decision it just made” and “A union leader has called out the Labour right for letting the Tories off the hook”, whilst Evolve Politics spoke of how “Only Labour can stop the Tory/DUP alliance from absolutely decimating women’s rights”. These sorts of headlines open them up to accusations of bias from their detractors, so even if the story is well sourced and informative, it’s credibility is undermined.

We should be pushing for independent media outlets that will remain sceptical and critical of every party to they can truly hold government and opposition to account. Left-wing independent media has had a crucial and ever increasing role to play in the political conversation and have provided a necessary counter-balance to the anti-Corbyn mainstream narrative. There is clearly an diversity problem in the mainstream media in terms of ownership, education, and viewpoint, as well as issues with trust and objectivity. However, the mainstream media still have a role to play, whether we like it or not. There is still some fantastic investigative and analytic journalism coming from mainstream outlets, so it seems foolish to write them off entirely. Independent digital media (from both the left and right wing) is likely to have a growing impact and audience in the coming years, but it is up to them to provide better quality journalism than the mainstream outlets they so fervently oppose or the polarisation of our political landscape is likely to continue.

17 thoughts on “Does The Mainstream Media Still Have A Role To Play?”