Explanations and Solutions
GameStop and Investing

GameOver: Is The NFT Dividend Coming? 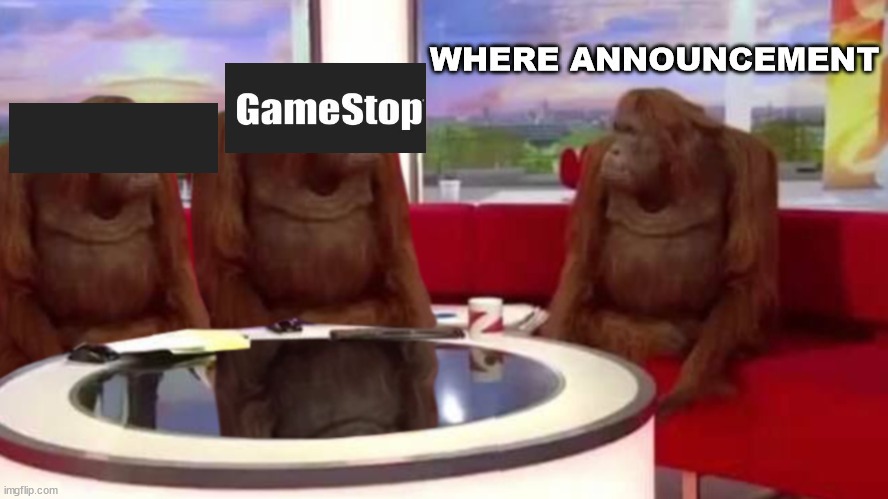 Ah GameStop, what will the world do once the squeeze has been squozen? Life will return to a state in which every Ryan Cohen tweet is no longer analysed like a Q drop by the rapid apes and everything will seem boring in comparison to the madness currently unfolding.

Thankfully the GameStop story still has a few tricks up its sleeves to keep us entertained. Primarily the rumours and speculation that they will become the first company in history to expose hedgefund’s naked short selling practices by issuing, yes, an NFT dividend. Here at the Stonk News Network today we’re going to break down how this could work and what this means for you, the retail investor.

We are going to separate the rumour from the fact when it comes to the possibility of an NFT dividend, explain why the dates that were hyped thus far were incorrect, and what we can expect from Ryan Cohen and co. Are they going to break those god damned hedgies and expose their corrupt practices? It sure seems like it so lets dive!

There has been an outrageous amount of speculation about GameStop and their plans to issue an NFT dividend.

So how does this relate to GameStop? Well, a traditional dividend is paid out to investors, it’s a nice little bonus for owning the stock of a profitable company (though not all companies issue dividends). If a company has been a victim of naked short selling, like perhaps GameStop, it means that whoever has issued the naked or rehypothecated shorts will be required to pay the extra money to cover the extra dividends. If there are twice as many shares as should exist in circulation, then HFs would theoretically have to pay out twice as much.

Now that would be a great way to hit them where it hurt, but in the grand scheme of things, it’s not going to make a dent in their profits. What could hurt them would be if there was a way to use the dividend to expose how many shares are in circulation. And that is where NFTs come in.

A few months ago, GameStop made some very subtle but exciting changes to their website that foreshadowed the introduction of an NFT dividend. They created a token on the Ethereum blockchain set to go live at 4.20am on July 14th – Bastille Day (otherwise known as the start of the French revolution). Now obviously a bunch of Apes got hyped about this coincidence, but the day came and went with little fanfare. It was later confirmed by the developer of the token, that this was simply a teaser, to test things. GameStop are still building the team and anyone who has worked in tech will know that the development of anything like this cannot be set for a certain date and can take a lot of time.

Now it’s time to delve into some of the more interesting points about the possibility of an NFT dividend.

GameStop have recently posted a job description for Director of SEC and Financial Reporting relating to stock based compensation – ie a dividend.

The new hire will be responsible for monitoring SEC developments to identify and document the potential impact of new pronouncements or other authoritative guidance and manage the implementation of the related disclosure requirements. Most intriguingly, the position will involve ”the equity process including tasks related to stock-based compensation, equity rollforward, shares outstanding, calculation of basic/diluted EPS, including an evaluation of the dilutive impact of equity-based awards with performance conditions.” Now this may be a fairly standard job description, but when you consider it in light of the information we’re going to lay down in the rest of this video it might mean a little more.

There have been a number of posts on r/Superstonk that have suggested that eTrade have accidentally revealed the date of a dividend on the 17th of September. However, that seems to have been a weird quirk of the platform, as it is unlikely that a single broker would get to know this information ahead of all the others. One redditor called the firm and confirmed, this is just a maybe with no real backing.

Obviously this means nothing…

Instead let’s focus on the GameStop prospectus issued this year. They state

“We may also offer securities through subscription rights distributed to our stockholders on a pro rata basis, which may or may not be transferable… Unless otherwise specified in the related prospectus supplement, each series of securities will be a new issue with no established trading market, other than shares of our common stock, which are listed on the New York Stock Exchange, or NYSE.”

So they’re preparing to potentially drop a non cash dividend that has no existing market. Sounds promising right? But it gets better. They go on to say,

“In general, purchases of a security for the purpose of stabilization or to reduce a short position could cause the price of the security to be higher than it might be in the absence of such purchases. The imposition of a penalty bid might also have an effect on the price of a security to the extent that it were to discourage resales of the security before the distribution is completed.”

They aren’t going to force brokers to issue their special dividend, but they will potentially penalise those who fail to do it. They may be trying to put in place controls on the distribution process that could result in short sellers’ positions becoming more expensive. And what sort of technology would allow for this – smart contracts on the blockchain… This sounds like GameStop is discussing the creation of a new crypto market, where every shareholder is entitled to some number of NFT tokens or coins based on their stock positions.

They have also stated that if the DTCC isn’t able to handle the responsibilities of possessing GameStop’s shares for ANY reason, then GameStop will either appoint a new entity as the depository for their shares within 90 days, or else provide current shareholders with something else (possibly an NFT) that is equivalent. So they’re willing to sidestep the DTCC if they aren’t prepared to play ball. What a baller move that could be. That might even lead to the first ever use of blockchain technology to trade a stock – something that would eliminate the possibility of naked shorting and all the other shady practices that take place on Wall Street.

Now as Dr Susanne Trimbath has mentioned, other companies have tried to defeat the naked short sellers by issuing some form of dividend that is non cash – this is not something exclusive to NFTs and blockchain technology.

The DTCC is in charge of distributing the dividend and if there are counterfeit shares it will usually dip into its reserves to cover the extra money required to pay up. But with Overstock, when they attempted to issue a non cash dividend, the price began to spike, but the DTCC were able to find a loophole that allowed them to pay those holding counterfeit shares with cash. So that is why GameStop have decided that they will try to sidestep the DTCC, if they won’t issue the dividend as they see fit, then they will request their shares back from the DTCC, forcing them to figure out how many of the shares are real and how many are synthetic and thus we have… the MOASS. Theoretically…