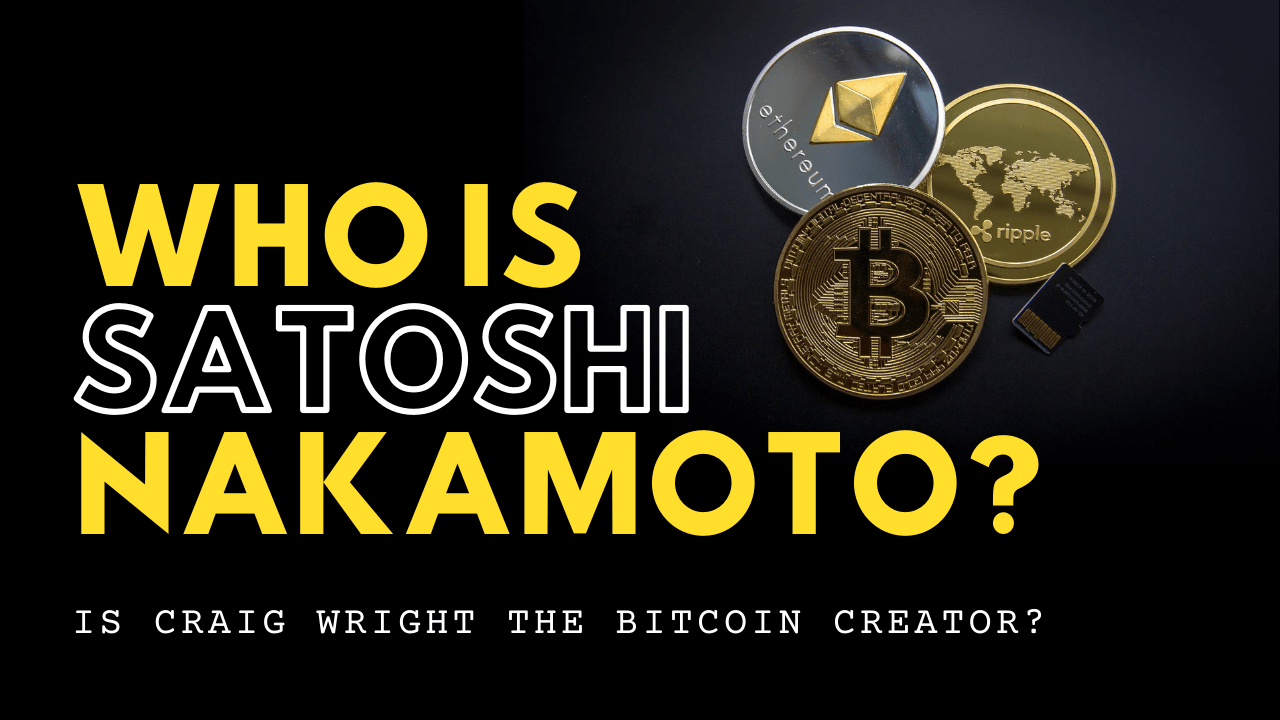 Most people don’t claim to know who Satoshi Nakamoto is. I’ve seen people make all sorts of outrageous claims that the famed Bitcoin creator is folks like Elon Musk or Vitalik Buterin, all the way to theories stating that Satoshi is a psyop created by the CIA in order to prepare the world for the Central Bank Digital Currency that would be implemented by the globalists and the New World Order.

Who Is Craig Wright?

Kurt Wuckert Jr thinks a little differently than most though, he told me that he believes Satoshi Nakamoto is Dr Craig Wright – a man currently embroiled in a court case that could well give us the answer. This is what Kurt told me,

“I have a personal relationship with Dr Craig Wright, we are sort of colleagues, he is the chief scientist at a company called nChain. nChain is the company that created the original BSV node client and they maintain the node client at the will of the Bitcoin

We do not know to this day who the leaker is who gave the information to the ATO, the local Australian media, Wired magazine and Gizmodo magazine and had them orchestrate this giant thing all in one day. Now, the curious thing is that Craig Wright did not live in that house any longer, he had moved to London several months earlier because he says that he knew that something was happening at some point and he needed to get his family to safety. So he as Satoshi Nakamoto knew that he had been hacked and had a mitigation plan in place that he executed at that point – when he was asked about it he denied it.

He’d been saying “No I’m not Satoshi Nakamoto” for quite some time. Ultimately, the attacks started immediately he gathered some people together, significant people in the space at the time. It was the president of the Bitcoin Foundation, it was the lead developer of Bitcoin

Core and he invited a number of other people to see signings. He was like “hey look, I want to prove to you very quietly that I’m Satoshi Nakamoto, because I’m in hiding, I’m in danger frankly. Let’s get some of the stuff out of the way, I really need some allies here because I was trying to be private, somebody doxed me and has this whole thing and I’m afraid for my life”.

So he showed Gavin Andreessen who was the head of Bitcoin Core at the time and John Mattone who was the founder of Hushmail and a bunch of other stuff, but he was the President of the Bitcoin Foundation and he showed them definitively “hey I’m Satoshi Nakamoto”. When Gavin Andreessen came out the next day and said “hey I met Satoshi Nakamoto” he showed it to me on this laptop, he did a key signing and did all this stuff; bam keys revoked Bitcoin Core said you’re out of Bitcoin Core we assume you’ve been compromised and therefore you’re not allowed to commit to the Bitcoin core repo any longer.

Well that’s curious, isn’t it? Gavin, who had been developed, was one of the very first Bitcoin developers, he developed with Satoshi, and he had a personal private relationship with Satoshi Nakamoto. Satoshi Nakamoto left Gavin Andreessen the keys to the project and said Gavin is in charge of Bitcoin and the moment Gavin said I believe Craig Wright Satoshi Nakamoto, he was kicked out.

Heads rolled; everybody that saw Craig Wright and said Craig Wright Satoshi Nakamoto was basically kicked out of the Bitcoin community immediately. So Craig took a very big step back and said “okay you know knowing me or knowing my truth or whatever is now a liability to people’s livelihood career safety”. Who knows what else, stuff got very very very contentious very quick, but yeah I believe firmly that Craig Wright was the creator of the Satoshi Nakamoto moniker that he was the author of the white paper and was generally the architect of the Bitcoin system protocol rules etc. Craig has been very clear that he had people that helped him with software dev and other stuff, that he hired people, and that that he had help but that Bitcoin was his idea. It’s like the architect of a building; you know there’s also stone cutters, there’s glass guys, there’s wood guys. It’s the architect, it’s his building right, so that’s how I understand Craig Wright to be Satoshi Nakamoto.”

Satoshi Nakamoto Is The BTC Creator

So that it seems like if there have been quite a few people who were very close to him and they believe that when he said he’s Satoshi Nakamoto and he’s proven it to them – these people are all very big in that space and have been there since seemingly almost the very beginning or at least very early on in in the story of Bitcoin and yet it’s so disputed. It seems weird to me. I only realized that there was even someone who was like quite legitimately claiming to be Satoshi Nakamoto from Kurt’s Twitter feed about two months ago. Everything that I’d seen about it was essentially just “who is Satoshi Nakamoto” articles in the mainstream press.

“Craig Wright is the name that no one’s allowed to say. People are going to reach out to you and tell you 100% that I’m a lying scammer, that Craig is a lying scammer in the whole thing. This is going to happen and if you do not agree with, you do not bow and kiss the ring of BTC and the small block narrative, they are going to kick you out of the club. I guarantee you this! I’m not in the class don’t worry and but this is what happened to Craig too. People were a little okay with Craig you know, I mean people were obviously curious, but thought “okay maybe he’s Satoshi let’s check this out” but as soon as he came out and said BTC, the small block notion, lightning network, all this stuff is wrong.

Bitcoin was always intended to be no block size limit no protocol limits no any of this, it’s supposed to be the data ledger for global commerce period all commerce should be on Bitcoin. It was like “oh no that flies in the face of everything that we have built our reputations on”. Ultimately I break it down to the fact that there’s a lot of venture capital money that was given to a lot of development groups between 2014 and 2015. Blockstream was given about $40 million by MasterCard Ventures in 2014 to establish a professional Bitcoin development group and i would argue that MasterCard has a major conflict of interest in being one of the primary funders of Bitcoin development right? So Craig flies in the face of their portfolio period. I think that is the biggest aspect of it is that “hey BTC is not supposed to look like this this is not what I created as Satoshi Nakamoto” and so what he tells them is that ultimately when you make a protocol change at all, so this is soft fork/hard fork whatever, if you change the protocol the MIT license is very clear that you need to express that change with a name change. So BTC making a fundamental protocol change means that it’s not Bitcoin even if it synchronizes if it’s the longest chain and the most proof of work and all of that because the governance is what matters and so it’s a ticker war; it’s like a social war about understanding what is the real Bitcoin and that is a conversation that is too philosophical for most people. And there’s a ton of money tangled up in it.

Here’s the thing, BSV has heavily underperformed the markets and therefore people will say “well yeah because that indicates that it is a scam” and I would argue, well no, the powers that be, the wealth structures of the world, if you look at like Silicon Valley Venture Capital, if you look at the central banks of the world, you look at the the the World Bank – do you know who’s one of the biggest advisors to companies like Lightning Labs and Blockstream and Coinbase and Kraken and BitGo and Grayscale and Coindesk, the media company Abra Wallet, Fire Blocks? Who else? We got a bunch more, we got Genesis Trading and probably 50 more brands – the lead advisor is a guy named Larry Summers. Larry Summers is a former World Bank president, so if we’re talking about disrupting global finance we have handed the advisorship of all of these key brands and infrastructure partners and developers, all these different things in the space, and we’ve given it to the former World Bank President. He was a policy adviser to the Clintons, in the Clinton White House, and he’s from Harvard – I believe he’s the President of Harvard University. Then look at the other people in that organization, including people from Bain Capital – which was Mitt Romney’s Venture Capital firm, there’s Barry Silbert who was a a big serious Wall Street guy and and these guys are paying the salaries of all of the people who are influencing the direction of BTC. Just the fact that they own Coindesk.

Coindesk is looked at as the definitive authority in reporting on the entire blockchain economy, but they are owned by a portfolio company of MasterCard Ventures and so you are getting fed information about what is the best blockchain, why does it have value, how do we determine what is good, and you think that you’re not being propagandized, but every bit of information is coming from people who are paid by MasterCard to tell you what Bitcoin is. It’s a massive conflict of interest and nobody’s gonna tell you except this guy and this is why people like to say I’m a conspiracy theorist and all this stuff, but go ahead and look you can look it up. MasterCard Ventures created a digital currency group and the digital currency group has the portfolio of essentially every brand that matters in the entire blockchain economy and so this decentralization thing is decentralization theatre and we’re all being paid off to go along with it by becoming fiat rich. You know if i just made 10x gains in the last year I’m gonna be like “you know what maybe it’s good anyways, let’s move on I’m appreciating these gains here right”.

Whenever I see anyone labelled as “conspiracy theorists” these days my initial thought is always – what have they got to say that’s important? I’ve seen too many people saying important things called conspiracy theorists to dismiss anyone now. So let me know if you think Craig is Satoshi Nakamoto or just a grifter.