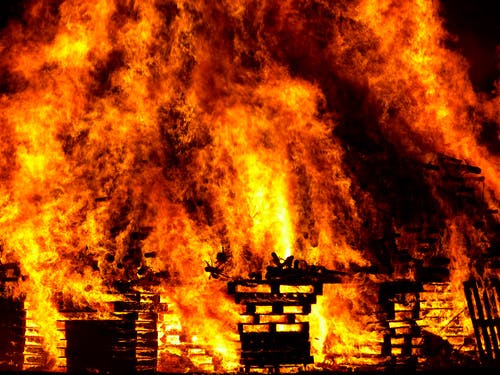 It really is not so difficult to imagine a world in which all of these questions can be answered with a common sense “yes”. Those of us who wanted to participate could enjoy the celebrations and then we could move on until next year where we would celebrate them again without controversy. Sadly, this is not the world we live in. At times it can seem like an utterly fantastical pipe-dream that something in Northern Ireland might be dealt with sensibly and with respect for all sides of our community.

The controversies unfolding over the past week have provided the perfect microcosm for why we are unable to form a government. We seem to have barred common sense from entry into the country, in words of Alex Turner we’ve “called up to listen to the voice of reason, but got its answering machine“.

It’s been more than 900 days since we had a government at Stormont and the chances of talks progressing or any form of executive being formed seem further away than ever. It’s been held up by the Irish Language Act and gay marriage, all stirred in with a nice little dose of RHI corruption. In another timeline, the DUP were punished electorally for their corruption, the Irish Language Act would be passed in a restricted form, the people of Northern Ireland would accept they live in a shared and divided community (just as we accepted when we voted to enshrine the Good Friday Agreement into law 21 years ago), gay marriage would pass, and we could all move on to building the best and brightest future possible for our country.

Instead we are trapped in a viscious cycle where no progress can be made until sectarian divisions are not the be-all and end-all of our political conversation. There is no reason to compromise when compromise and progress are the only behaviours that voters seem to punish. We will never move beyond these divisions whilst they are the basis of our politics and we will never shift them from the base of our politics until we can move beyond these divisions. It’s an incredibly depressing state of affairs for someone who honestly believes that Belfast and Northern Ireland as a whole could become a prosperous and flourishing place. We were part of creating the biggest TV show in the world, our tourism industry is booming, our night-life has never been better, we are hosting one of the world’s largest golf tournaments and have produced some of the world’s best golfers. Our rugby players contributed to the Irish team who beat the world’s best and our fans (alongside the Republic of Ireland fans) are celebrated as the friendliest and most enthusiastic at every major tournament that our football team attends.

And yet here we are, mired in conflict over burning some tyres.

“The proliferation of tyres provided an excuse, but do not be mistaken, it was only an excuse to advance their ultimate objective which is the total eradication of every vestige of unionist culture.” – Jamie Bryson, Unionist Voice.

It seems fairly simple to me. Don’t burn tires. Don’t build bonfires in dangerous places. Bonfires 100ft high are dangerous. That doesn’t seem like rocket science. In 2016 a row of houses on the Shankhill road caught fire after embers from the nearby bonfire were blown onto the roofs, but clearly asking anyone to build bonfires in a safe place is an infringement on their rights and an erosion of Unionist Culture by the Nationalist Belfast City Council.

Parts of the Northern Irish community have become so terrified of any erosion of their culture that they react violently to any attempt to control or monitor activities in their areas. It’s almost as if, in the absence of real conflict, every issue, big or small, has to become a battle to fight. We behave as if people have learnt nothing more from the Troubles and it’s legacy except how to hate and react violently. Whether it is tires on bonfires, flag controversies, gay marriage, or Brexit, we seem unable to engage in a common sense discussion. Either none of us are willing to, or those who would are drowned out by the extreme voices on any side, condemned by their own apathy to sit and complain from the sides that no-one will ever listen to reason.

There is no Nationalist BCC. There is no stealth plot to turn Northern Ireland over to the Republic. Attempts to ensure safely lighting 100ft fires in residential areas are not an infringement upon our rights. A reconsideration of whether Brexit is a good idea is not a betrayal of the people, Brexit makes a United Ireland much more likely. Unionism’s biggest threat is themselves, not the imaginary bogeymen they seem to need to constantly conjure up to energise their base or community.

Worst of all, as we squabble and fight over the tiniest, most trivial issues, we are missing the real destruction of Northern Irish heritage. The beautiful traditional architecture of Belfast is being rapidly sold off and demolished to make way for soulless, template buildings that could be found anywhere. North Street Arcade is part of a massive development project that will demolish numerous historical landmarks across the Cathedral quarter. The development company responsible will be rebranding the area “Tribeca”, like area of Manhatten, in what can only be assumed is designed to attract international investors. They have refused to back down on the name, despite huge backlash, claiming that it stands for “Triangle beside the Cathedral’.

Here is an demonstrable, literally destruction of Belfast’s heritage to attract international developers and turn Belfast into yet another ground for property speculators. Where is the outrage from those concerned with the erosion of their culture? Where are the protesters who lined up to fight back against the removal of tyres from bonfires, or flags from City Hall? Belfast is being packaged and sold as another destination for property developers to drive up housing prices, make a quick fortune at the cost of our traditional architecture, and it is being wrapped up and packaged as a celebration of Belfast. This is the battle we need to be fighting.