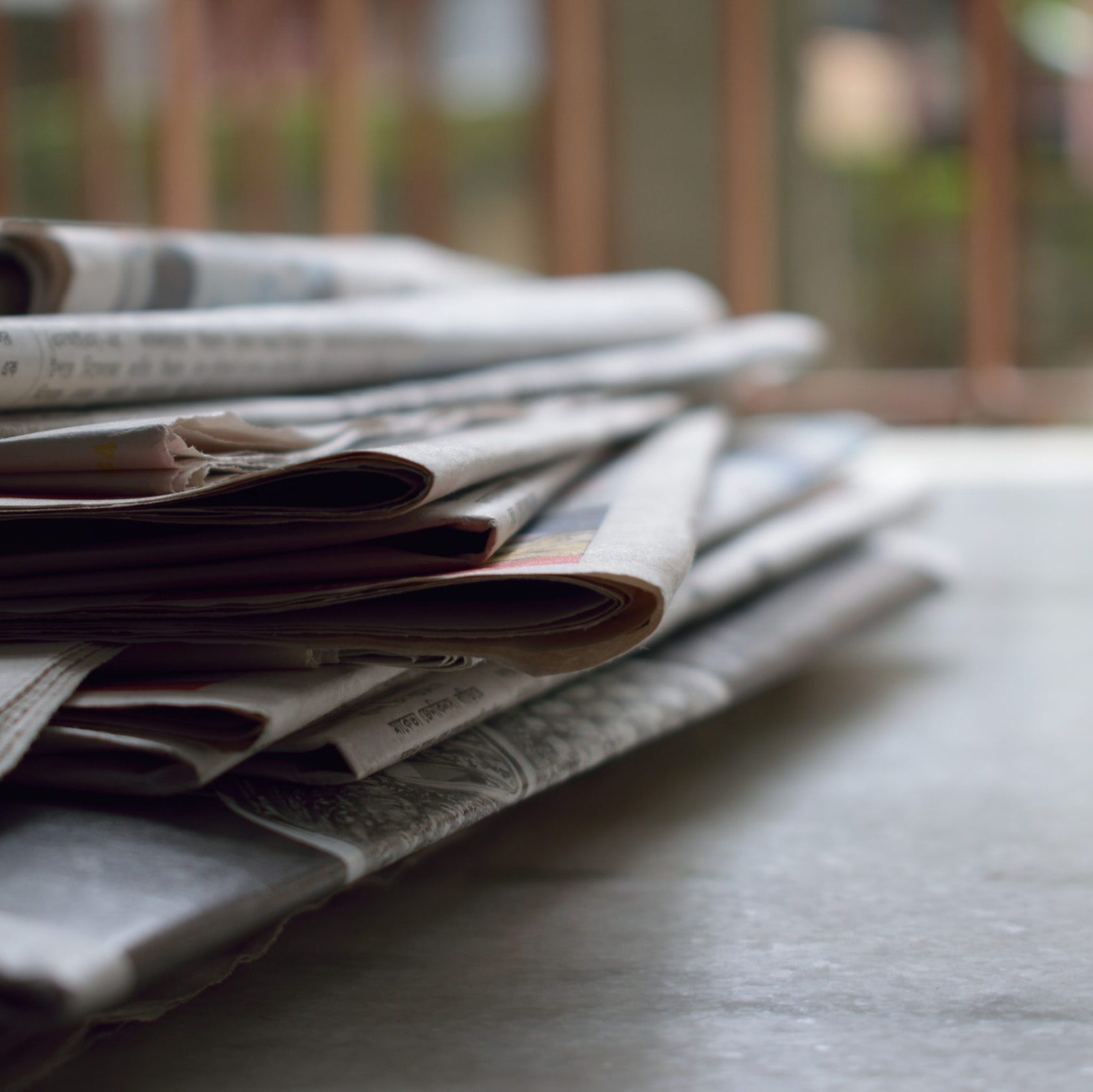 Think of the press as a great keyboard on which the government can play.

Mistrust in the mainstream media has been fuelled by allegations of bias and the spread of ‘fake news’. Reuters Institute Digital News Report 2017 found that just over 40 per cent of people in the UK agreed with the statement, ‘I think you can trust news most of the time’, a shockingly low figure for a developed Western nation with a free press. We should, however, be thankful that the problem isn’t quite as bad as in the US – given the level of madness in America and in Brexit you may have missed or forgotten the incident where President Trump launched a series of bizarre personal attacks over Twitter aimed at CNN and ‘Morning Joe’ hosts Mika Brzezinski and Joe Scarborough. He tweeted: ‘Crazy Joe Scarborough and dumb as a rock Mika are not bad people, but their low rated show is dominated by their NBC bosses. Too bad!’

He followed this up with an edited professional-wrestling video of him tackling a man with the CNN logo superimposed on his face. It might seem trivial to mention this, but it is a great example of the way Trump (and to an extent our politicians) can get away with disparaging the media because they are biased; even defenders of the free press can’t help but accept that critics of the media have a genuine point. I’m alarmed by the attack on the press, but CNN is far from the world’s greatest news channel – they don’t have a single investigative reporter on staff. It is basically a 24/7 political theatre, where pundits and guests compete to get the best zing in that fits in 280 characters or a 30-second soundbite.

Members of our government have repeatedly accused the press of being overly critical of the Brexit process; Andrea Leadsom famously asked the BBC if the media could be a little more patriotic about Brexit. We should be thankful for the integrity of democracy and our political system that they haven’t directly attacked the press in the way Trump has.

There have also been accusations that certain members of the right-wing press, most notably Daily Mail editor Paul Dacre, have received preferential treatment and were courted by Theresa May’s government to help them sell the Conservative message. It was revealed in March 2017 that Theresa May had hosted Dacre at 10 Downing Street several months into her reign as prime minister, which triggered further allegations that the Daily Mail was simply a mouth-piece for the Conservative Party. Running headlines like ‘Crush the Saboteurs’ and ‘Enemies Of The People’ in full-throated support of Brexit and Theresa May’s distaste for democratic debate did little to quell or combat these allegations.

These sorts of headlines hardly seem like reasonable responses from an independent press, especially one that spent months campaigning for British courts making British decisions. The judges who declared parliament should have a vote on the Brexit deal were labelled treasonous for dictating that parliament should be sovereign. This definitely seems like the response of a reasonable and well-balanced news outlet.

The anti-Corbyn bias and almost unwavering support of the Conservative Party amongst the right-wing papers, combined with the level of mistrust in the media, have spawned an explosion in independent media over the past few years. Outlets like The Canary, Evolve Politics, Novara Media, and Another Angry Voice have sprung up to provide a counter-narrative to the establishment media. They have not yet come to dominate our news landscape, despite their best efforts, though they are making serious inroads into the influence of the right-wing media. There are also still traditionally centrist and left-wing outlets running in the mainstream press, but it is the right wing, and particularly the tabloids, that have the widest reach and thus the biggest impact on our political landscape and conversation.

This isn’t just in print either, traditional outlets have made a somewhat successful jump to digitally-driven journalism and media, although some have had to resort to paywalls or asking for donations/subscriptions in order to compete in such a media-rich environment. This transformation towards digital media is just another iteration of the disruption that tech and the internet have caused across every industry. Look at what Uber did to transport, what Amazon did to retail, what Fintech start-ups are doing to financial institutions, what Airbnb did to hostel and hotel bookings, the list goes on.

In our drive to find truth where mainstream media has left gaps, we have been left open to being fooled or manipulated, especially if we don’t do our due diligence. We have to find new ways of ensuring that people know who can be trusted as honest arbiters of information. Back in 1996, just as the internet was starting to grow beyond the very fringes of society and technology, Nicholas Negroponte predicted that the digital revolution would create a ‘cottage industry of information and entertainment providers’. That is what we see now, a mass of public and privately funded news and content providers pumping out hours of exactly what we want to hear or read, their business model relies on our clicks and engagement. Our commitment to the truth is rarely as prominent as our own biases, so whilst the truth is most important to a free and functioning press, it may not be what we really crave – we want to remain in our echo chambers.

Net Neutrality has levelled the playing field in terms of our access to information, but now we have to rely on our critical thinking skills, not just the press regulator. Unfortunately, the press is largely unaccountable, no major outlet has signed up to a state-backed regulator. In fact, the only outlets who have signed up to a state-backed regulator are sites like the Canary, Evolve Politics, and Left Foot Forward (a left-wing blog) through the independent regulator IMPRESS. Ironically, these outlets are often criticized by those in the mainstream press for being nothing but fake news and lefty nonsense, despite IMPRESS being the only press regulator in Britain to have complied with the results of the Leveson Inquiry into press practices. It’s fantastic to see a media revolution attempting to improve the quality of journalism in the UK, it’s a testament to the human desire to seek out truth. Yet, these outlets cannot be relied upon to produce the kind of investigative journalism that we need in a democracy. In an interview with Vice, Ian Hislop explained that:

What you can’t get online is that dedication to journalism which is very expensive and requires a lot of time. People investigate things and nothing happens – you don’t get a story and people say, ‘Well, that’s a waste of money.’ It isn’t, it’s part of the next story that will be any good. Online is much better at opinion and ‘bleugh’.

Within news and media, traditional outlets have managed to stay competitive in the market, and whilst disrupting independent blogs have started to gain more and more traction online, their imprint on the entire population is still rather small. According to 2017 research done by NewsWorks.org, print journalism still reaches one in every two adults each week, whilst online, UK news brands have driven 940 million social media interactions in the last month, including 817 million interactions on Facebook and 110 million interactions on Twitter. Despite the meteoric rise of blogging and alternative media, news brands still reach 97 per cent of all millennials and have significantly more interactions online than even Buzzfeed can garner. The influence and reach of mainstream papers has been reduced in the past few years, and trust has been eroded, but the MSM still play a huge part in our political conversation. Sun editor Tony Gallagher texted The Guardian team about an hour after the final result of the Brexit referendum was revealed, ‘So much for the waning power of the print media.’ Despite trust in their content waning rapidly, the mainstream tabloid press has had a hugely detrimental impact on our understanding of Europe (and politics as a whole) and on the quality of our political conversation.

This is an extract from Brexit: The Establishment Civil War – Order it here now