The B Word: Much Bitcoin, Very Doge 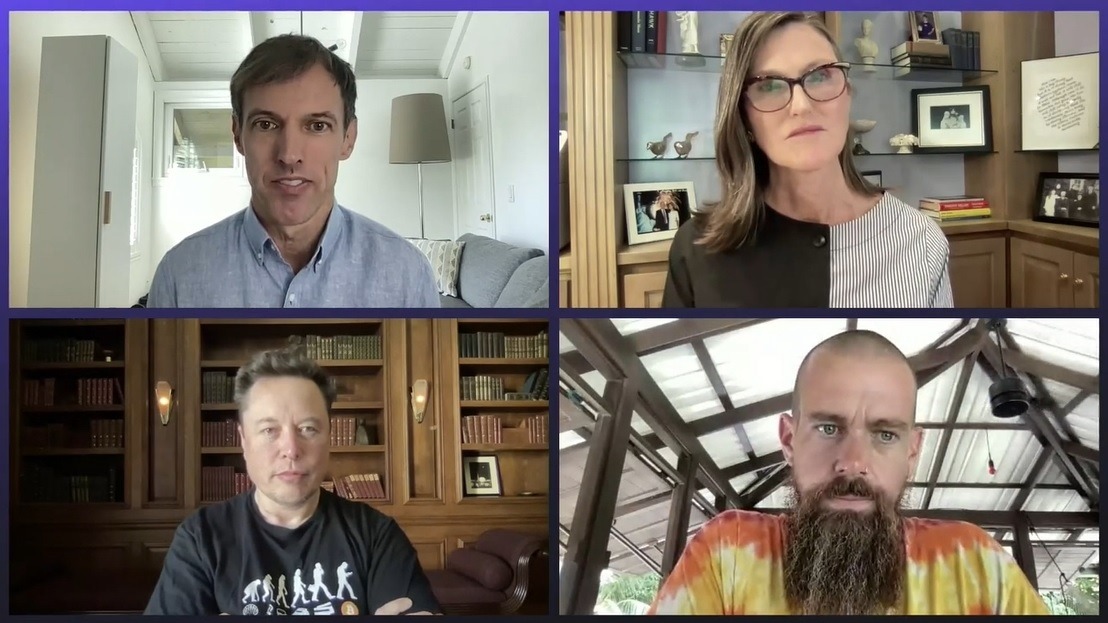 ‘The B word’ event took place yesterday and was aimed at encouraging institutional investors to adopt Bitcoin. The main focus of peoples attention was the hour-long discussion between Elon Musk, Jack Dorsey and Cathie Wood surrounding Bitcoin. There were many topics covered, so we’re going to briefly outline the highlights for anyone who missed it.

Elon Musk revealed that his crypto portfolio consists of Bitcoin, Ethereum and Dogecoin, further stating that the majority of his holdings are in Bitcoin. The event caused a spike in the prices of all three cryptocurrencies, but Ethereum saw the biggest leap, jumping back above $2000. He also revealed that SpaceX holds BTC on its balance sheet alongside Tesla and that he would like to see Bitcoin succeed and that he is also a fan of DeFi.

The topic of Tesla and its stance on Bitcoin being accepted as payment again was brought up. The announcement from Tesla that they would stop accepting Bitcoin payments was one of the catalysts for the Bitcoin sell-off in late May. Musk stated that the Bitcoin network is increasingly adopting renewable energy as its source of power and that once at least 50% of the power being used by miners was coming from renewable sources, he would feel comfortable allowing the car firm to accept payment in Bitcoin again. He also said that more diligence into the energy sources of Bitcoin miners is still required but that it is most likely that Tesla will resume accepting Bitcoin in the near future.

Jack Dorsey spoke about the cryptocurrency being used for payments and transactions saying “If the internet gets a chance to have a native currency, what will that be? To me it’s Bitcoin.” This prompted Elon Musk to discuss how Bitcoin can’t scale to be a world monetary system at its base layer and will require a secondary layer such as the Lightning Network. However, he said with a secondary layer solution it would be able to scale to process a vast number of transactions per second and the same goes for Ethereum. (You can check out our explainer on the Lightning Network below).

Cathie Wood put more emphasis on Bitcoins use as a store of value. She discussed how it is a good hedge against inflation and hyperinflation in emerging markets; essentially giving people affected by this the option to preserve their purchasing power. Cathie also mentioned Bitcoins ability to solve worldwide remittance problems in which people sending cash or payments can incur fees up to 20% using the traditional financial systems. Its ability to cut out these fees has been seen in El Salvador where Bitcoin was recently adopted as legal tender.

If you want to check out the full discussion for yourself or our discussion on the live stream on SNN live then follow the link below.

If you enjoyed this article, why not sign up for our brand new Crypto Newsletter, with a round-up of the last week’s crypto news, podcasts, and crucial information that you might have missed! Sign up here!

bitcoin, btc, cathy wood, doge, elon musk, eth, ethereum, jack dorsey, the B word
Previous PostWhat Is Happening To Justice In The UK?
Next PostChatter #170 – Ryan Hartwig on the Censorship Inside Facebook And How Big Tech Is Corrupting Our World