How The Conservatives Are Trying To Win Back Young Voters

The results of the 2017 election made it very clear to even the upper echelons of the Conservative Party that the youth vote was abandoning their party in droves. The Conservative vote share in the 2015 General Election amongst 18-29-year-olds was a respectable 32% to Labour’s 36%, but by 2017, that share had dropped to around 20% compared to Labour who took almost 2/3rds of the vote.

There are numerous factors that you could point to in order to explain this seismic political shift over the past two years, such as the rise of Jeremy Corbyn, Brexit, the resignation of David Cameron, the continuation of austerity, spiralling student debt, to name a few. However, the real question for the Tories remains, how can they win back some of these voters? 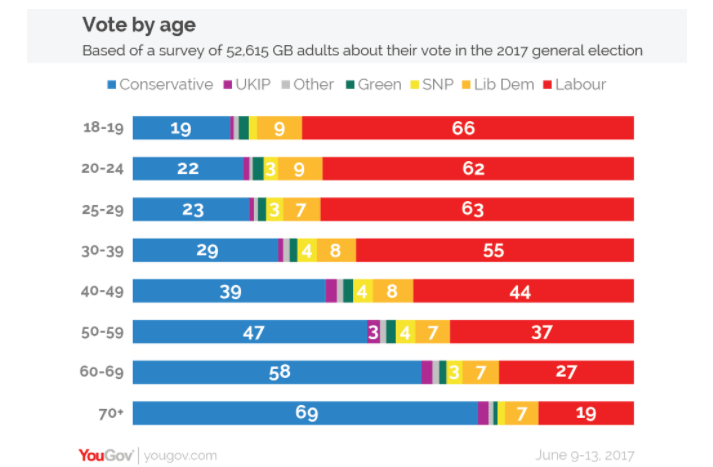 Since the election, there have been numerous Tories and ex-Tory MPs throwing out suggestions for how they could win back the support of younger generations. Michael Heseltine was particularly concerned about the ever widening age split in British politics, remarking that,

Just days after the 2017 General Election, Damien Green was pushing to have a national conversation about tuition fees in order to try to win back young voters disillusioned by spiralling student loan debt. He urged for the party to “recast our core beliefs in a manner that captures the prevailing mood of the era”. George Osborne, despite his resignation from the party, even commented that “if the party doesn’t move towards the centre this will be its last spell of government”. There is no shortage of Conservatives growing increasingly concerned that they are losing the younger generations, so in an effort to try and win back disaffected millennials there have been a number of strategies put forward by various MPs, activists, and think tanks that we wanted to explore here!

Social media is the vehicle, not the reason, for Corbyn’s success. Social media and the internet, in general, were crucial to the success of the Labour party message, with blogs and independent sites like Evolve Politics, Political Provocateur, and Another Angry Voice spreading the Corbyn message without the perceived mainstream media bias. Both Labour and Momentum used social media to spread the word about policy, rallies, voter registration, canvassing, and getting people to polling stations in ways that the Tories weren’t able to do. Shockingly, Conservative party social media never mentioned voter registration during the entire election campaign.

Despite calls from numerous leading Conservatives, such as Richard Morgan at ConservativeHome.com, to revamp the digital strategy post election, there seems to have been very little change in tone or approach on the party social media profiles. Data produced by We Are Social showed that the Labour Party increased its following by 61 per cent across Facebook, Twitter and Instagram in the six weeks after the election was called. The Conservatives’ following rose by just 6 per cent in the same period. Conservative strategy was designed to appeal to swing voters (much like their very successful 2015 digital campaign of targetted social media advertising), but the rhetoric they used was generally divisive and appealed mainly to current supporters, not independent or undecided voters. These tactics seem to have continued to this day.

Absolute clarity?! While Labour just try & play politics, the Conservatives are working to get the best Brexit deal for everyone. pic.twitter.com/PfrWg2ecDd

Following the incredible support shown for Corbyn during his Pyramid Stage appearance at Glastonbury, numerous Tories took note of the publicity that Labour and Jeremy Corbyn were able to generate at the festival. Norfolk Mp, George Freeman, commented on Twitter “Why is it just the left who have all the fun in politics?”, and has since organised what he envisaged as a “cross between Hay-on-Wye and the Latitude festival”. He criticised the increasingly corporate and exclusive nature of the Conservative Party Conference, although the private event he is organising will be invitation-only with between 150 and 200 attendees at a secret location so as to avoid being gate-crashed by any Labour supporters. Plan’s have since been confirmed for,

“An inaugural ideas festival event outside of London to kick-start a new conversation about what is needed for the grassroots renewal of mainstream politics. It’s the ‘Big Tent Ideas Fest’.”

Matt Kilcoyne of the Adam Smith Institute was supportive of the idea, commenting that: “It’s a good thing the Conservatives are thinking about new ways to engage with people.” But he was also critical of the lack of substance:

“it’s not enough for Tories to just hold events, they have to inspire people to turn out and vote for them. And that starts with inspiring policies. They should look at building support among the young by liberalising planning so that a house building revolution can take hold.”

The idea came under criticism, understandably, as some Conservatives seem to have missed the reason for the success of the Pyramid stage appearance. The populist message of Jeremy Corbyn is in keeping with the atmosphere and demographic of Glastonbury, it wasn’t simply about festival hedonism.

The Adam Smith Institute also published their “Millenial Manifesto” recently, outlining their proposal’s for how they think the Tories should go about pulling back younger voters from the Labour camp. You can read the manifesto in full here, but in short, they proposed the following policies:

Whilst there are some policies that have major support amongst young people, such as a progressive drugs policy and the restructuring (and nationalisation) of student debt and financing, there are a number of issues that aren’t addressed. There is no mention of environmental issues or impactful suggestions for dealing with the spiralling cost of housing. The Centre for Economic Policy Research predicted that over the next 50 years, the cost of housing relative to wages would rise about 40% and then double in the following 50 years. Whilst some of these policies would be welcome steps towards making life more affordable for younger voters they play to a larger issue that many voters have with the Conservatives, that their purported beliefs don’t line up with the legislation they are passing.

The Conservatives have promised action on climate change, energy price caps, board-room pay caps, to reduce the national debt, to reduce immigration figures, and much more that they have failed to deliver on. It is a trust problem that ails the party more as much as the policy problem.

This where Activate was supposed to come in.

“Activate is an independent national grassroots campaign organisation that seeks to actively engage young people in the right of centre politics, make a case for what conservatism can offer and provide a platform to enable their voices to be heard.”

Activate is essentially the Conservative attempt to replicate the success and influence of Momentum, described by Fizarn Adris (the person who brought the group together) as an organisation dedicated to “promoting the achievements of the Conservatives, whilst exposing the fake news shared by Labour and its supporters”.

Activate stand for, according to their website, a fair and open Britain that promotes environmentally-conscious business and development and pushes to create a generation of home owners. Yet these issues are not adequately addressed or pursued by the Conservatives. They just sold off the Green Investment Bank to a consortium led by a firm with a history of asset stripping and despite promising to build 1.5 million homes by 2020, just 162,000 were started in 2016/17 – well short of the 250,000 or more that are currently needed each year. Of these 137,000 were private sector builds, so of the homes being built, the government are having very little influence. As Political Provocateur point out, there is a serious disconnect between their actions and words.

Activate spokesperson Sam Ancliff explained to us in the latest episode of Chatter (which you can listen to above) that he feels there is a serious problem with the disconnect between the Parliamentary Conservative Party and the electorate, remarking that “a lot of time the party doesn’t know what young Conservative voters want to receive from their government”.

The Tories have realised that they need to change their campaign tactics and philosophy in order to win back the support of younger voters, but haven’t seemed to grasp the reasons why young people don’t see them as a vialble option. Until they do, they are likely to continue to repeat the same mistakes.