What Now For Wesley Sneijder? 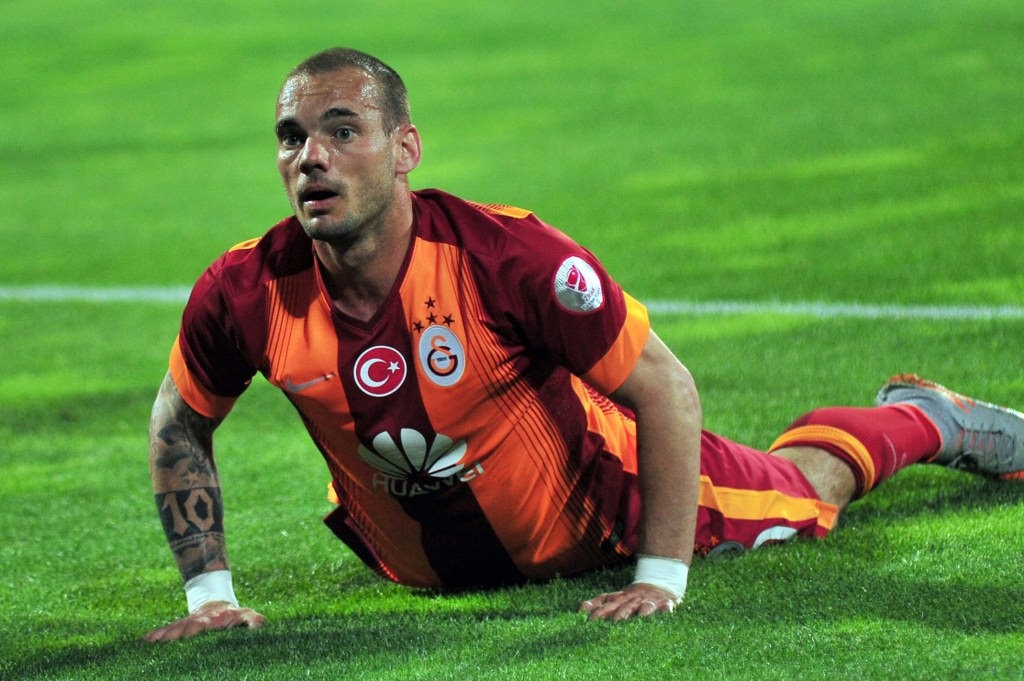 After falling out with manager Igor Tudor and not appearing to be in his plans, Wesley Sneijder is now a free agent after having his Galatasaray contract cancelled by mutual consent. The 33 year old conceded earlier this month that he was not yet aware of any interested clubs but that he trusts in his own qualities. So what next for the most capped Netherlands international? We take a look at some of his potential destinations.

Move to the MLS

One option that has been touted is for Sneijder to join other ageing midfield maestros such as Bastian Schweinsteiger and Andrea Pirlo in the MLS, with new franchise Los Angeles FC rumoured to be interested in taking the Dutchman to California. The same side have also been linked with another free agent in Zlatan Ibrahimovic, an alluring prospect. Montreal Impact are reported to have made the most serious offer so far, with the possibility open for Sneijder to play in Europe on the short-term before making the move to North America.

One issue with this is that Sneijder may prefer to stay in Europe for at least one more season in order to make the Netherlands squad for the World Cup in Russia, however with the Dutch campaign on the brink of collapse the national side may look to giving younger players more experience.

Sneijder left Ajax 10 years ago in a €27 million to Real Madrid after coming up through the club’s famed academy. While there he won the 2003/04 Eredivisie and two KNVB Cups in 2006 & 2007. A return to the Johann Cruijff ArenA would arguably not be a step down from the Turkish Süper Lig and would keep him available for the Oranje. Sneijder could be a perfect replacement for recently departed Davy Klaassen after the former captain moved to Everton earlier this summer. He would be by no means the first former Ajacied to return to the club in their later years; following in the footsteps of the aforementioned Johann Cruijff as well as Frank Rijkaard and Johnny Heitinga, who all found themselves back in Amsterdam as their careers entered their twilight. A move back would also see him link up with former teammate Klaas Jan Huntelaar, who is making the switch from Schalke and aiming to win the Eredivisie after missing out on his first spell from 2006-2009.

Further inspiration may be found in another successful return in the Dutch league in recent years, after former Liverpool forward Dirk Kuyt swapped Sneijder’s Turkish rivals Fenerbahçe for the club he left for Merseyside, Feyenoord. At the end of his two season stint he retired having captained the club to their first league title since 1999 and their first silverware of any kind since 2008, scoring a hattrick on the final day to clinch the title and end his career in the most perfect of ways.

An experienced head in midfield could be just what Ajax need to return to their title-winning best and help bring through younger players such as Donny van de Beek, Hakim Ziyech and Frenkie de Jong into the Amsterdam club’s midfield. With the tragic news that promising academy product Abdelhak Nouri has suffered severe and permanent brain damage after collapsing in a pre-season friendly against Werder Bremen due to a cardiac arrhythmia, perhaps the time is right for Sneijder to return and provide leadership to a young side struggling to cope with what is already a tragic backdrop to their season ahead.

Ajax may not be the only Eredivisie club that could lure Sneijder back to the Netherlands, as recent reports have linked him with a move to hometown club FC Utrecht. While this would allow guaranteed first team football, questions arise as to whether Wesley Sneijder would want to move to a club that finished last season in 4th place and are currently in the 3rd Qualifying Round for the Europa League as opposed to Ajax who would give him a better chance of another league title and are still in with a chance of securing Champions League football for next season. It may come down to whether or not Ajax want to bring Sneijder back and if Utrecht can afford his wages, which would surely take a significant cut.

Move to the Premier League

After being previously linked almost endlessly with Manchester United while at Inter Milan, and previous interest from Chelsea rumoured in 2015, any rumours of a move to England are now inevitably met with groans and sighs. However a move to United would not be out of the question, if unlikely. Sneijder played his best football under Mourinho at Inter Milan and may be open to linking up with his former manager in the Premier League.

After a mixed season, United are looking to end their current run of disappointing league finishes and challenge for the title. Only 6 players in the current United squad are in possession of a Premier League winners medal and only Michael Carrick remains from the 2008 Champions League winning side, although Juan Mata won it during his time at Chelsea. With the club fighting on multiple fronts, Mourinho could do worse than recruiting a free agent in Wesley Sneijder to bring another experienced head to Old Trafford.

Mourinho has already shown his frustrations with United’s apparent lack of movement on in the transfer market aside from their two current summer signings. With midfield target Tiemoué Bakayoko choosing to join Chelsea and a move for the blues’ Nemanja Matic looking all but certain, United have allegedly switched their focus to PSG’s Marco Verratti. Further interest in full-back Serge Aurier means that it is unlikely that United will sign both, especially since they face competition from Barcelona for his signature. Should they fail to get their man, Mourinho may look for a safe option in Sneijder.

Return to Serie A

Sneijder left Inter Milan in January 2013 after falling out of favour with injury and contract renewal issues. He was instrumental in the treble winning side of 2009/10 before being one of the standout players at the 2010 World Cup in South Africa, where his Dutch side were defeated by Spain in the final. After going on to finish 4th in that year’s Ballon d’Or and helping Inter to a second place finish in the Serie A, retaining the Coppa Italia and adding a FIFA Club World Cup in the 2010/11 season, Sneijder could do little to prevent the club from backsliding as they finished 6th and 9th in the next two seasons. It came as something of a surprise that Sneijder moved to Galatasaray rather than head to one of the bigger European leagues and he could be seen to have unfinished business in Italy.

With interest from Montreal Impact, it could be their sister club Bologna that prove to be Sneijder’s next destination as he may be able to join the Italian club for next season before jetting off to Canada after the World Cup. However, they are not the only club in Serie A that are reported to want the Netherland’s most capped player. Sampdoria are rumoured to be interested with Sniejder’s agent reported to have met with club officials, although manager Marco Giampaolo appears to be opposed to the move, instead favouring Arsenal’s Jack Wilshere. Early reports of a move to Inter’s city rivals AC Milan have also died down in recent weeks.

But what about a return to the Nerazurri? As already mentioned, Inter haven’t finished higher than 4th since 2011, going through 3 managers last season as they limped to a 7th placed finish. With new coach Luciano Spalletti taking the reigns, it would surely boost morale of fans and players alike to bring in a player who was previously so central to their success. It should be said that such a move is highly unlikely.

If Sneijder fancies one last payday before he retires then he need look no further than the Chinese Super League. With big money moves for stars such as Oscar, Carlos Tevez, Hulk and Axel Witsel, there are certainly multiple clubs that would snap up a free agent of the quality of Wesley Sneijder given the opportunity. Only in January it was reported that Beijing Guoan were ready to offer €7.5 million for the Dutchman and were willing to pay him €12 million per year. If the MLS isn’t an option, Sneijder may look here for a post-World Cup adventure.

Whatever direction Wesley chooses to take his career, he should prove a real coup for most of the clubs linked to him. With the only real stumbling blocks being his wages, he is a free agent who is definitely worth a punt. His most likely destinations seem to be Montreal via Bologna or a return to the Eredivisie with Ajax or FC Utrecht, but with any rumours of potential destinations not sticking around longer than a few days there is still plenty of scope for other clubs to join the hunt.